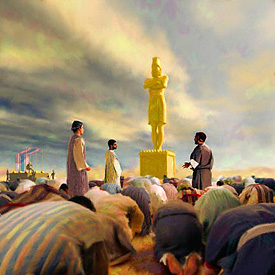 Last Monday I wrote about how we are chosen, we are different, so that we can make a difference. And when we own what makes us different, then we can use it to impact society.

An inspiring example is the three young Hebrew men in the Old Testament who didn’t fit into their society at all. They were different, and they used that to make a difference. There are three keys to this story:

They were competent. These young men had been studying in the midst of all that adversity for several years. But they were disciplined and they were skilled. King Nebuchadnezzar had even put them in charge of the affairs of Babylon. When the time came for them to stand up for themselves, they were ready.

They had conviction. They simply would not serve any other god. They owned what made them different, and that commitment empowered them to resist the King’s decree that they should go against their convictions. Conviction ignites your passion and drives your actions.

They had courage. Courage to be different. Courage to embrace what made them different. When they were under pressure to bow down, they said, “We will not bow down, no matter what the consequences.”

The three young Jews were different, and when they embraced their differences with competence, conviction and courage, the grace of God rescued them – and the result was that the king praised their God, defended their God, and promoted them in the kingdom. Society was impacted when they used what made them different.

We are the light of the world. We are the salt of the earth. Being a witness for Christ today takes competence, conviction, and courage. The grace of God chooses us, and then the grace of God empowers us to own what makes us different. Together we can use our differences to impact society.