One step closer to the final trumpet

Good morning! How are you? How has your weekend been? Mine has been okay, although sometimes grief over Carina’s passing can hit me when I least expect it. And when it does, I really have to both let it come, but on the other hand not sink too deep into it. There’s a tool for that: Deny yourself! Yeah, it’s true. There is only one way out of the grief, even though it does take time, and that is to take up the cross and deny yourself. God never makes mistakes, and trying to explain why will only lead to a dead end. Have you had the same experience?

Just after I got back from Ethiopia I repacked my suitcase for another trip, and this weekend I spoke at two very different conferences in undercover churches in an Arab nation. There are so many nationalities represented at these meetings, and it is fascinating to see how the kingdom of God is working its way into places that have been closed to the gospel.

Being here makes me think about the Roman empire and how the Gospel began to take over. Did you know that 80% of Rome consisted of slaves? And it was among the slaves that revival emerged. There wasn’t a single slave who didn’t receive Jesus. Think about this promise in the Gospel: “In Christ there is neither slave nor free…” Nowadays, many of the small countries around the Persian Gulf are filled with migrant workers. The man who served me coffee was from Ethiopia, our driver was from Pakistan, the cleaner was from India and another guy, who was full of questions about Jesus, was from Scotland. Together all of us are generating spiritual pressure in the Muslim totalitarian countries.

And that is what I was there to do this past weekend: I helped add to the building pressure. There is only one who loves “dry, desert places”, and that is the devil. That is why demons wander around places that are void of water. Water is a symbol of the Holy Spirit, and he is the goal of my meetings. I want as many people as possible to come into the Spirit, because where the Spirit of the Lord is, there is freedom! And when my thoughts are drawn to Carina, I remind myself again that every new people group that we reach is one step closer to the final trumpet! 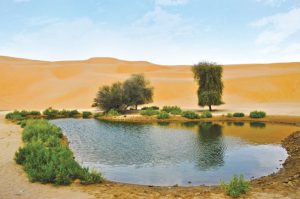