He has hidden a treasure inside of you!

Good morning! I hope you are doing well and that you are looking forward to the week ahead. I have been praying for you this morning. Did you know that you are a hidden treasure? In the same way that tears can become diamonds in God’s hands, what seems like an impossibility to you can be transformed by God into an opportunity. They might be hard to see sometimes, because opportunities are often hidden in opposition – and none of us like opposition. Resistance is always difficult! But I am writing today to tell you that opposition won’t always turn into defeat, because when God intervenes, he can turn the evil that has been done to you into an opportunity!

Are there things that have become acceptable in your life that should not be acceptable to you? Things that have been there for so long that you have just gotten used to them and accepted them the way they are? A health issue that never goes way, problems that won’t disappear, loneliness that you actually hate, or constantly coming up short in your finances? Eventually something that shouldn’t be acceptable has become acceptable in your life, so that when an opportunity for change does finally open up, or when God does answer, then you just get scared, or you hesitate, and nothing happens.

I think I am writing this for someone who is reading right now. You have gotten so caught up in seeing the impossibilities, that you don’t see that God has hidden an opportunity inside of what you think is impossible. An answer to prayer may have already come to someone else, but you didn’t understand it since you are stuck waiting for God to answer your prayer in a certain way.

If you ask God for something and he answers, he might not always do it the way you want him to. From his perspective, though, he is giving you something far better. You might not be able to see it because you have focused on your own version of a solution, so you don’t accept his answer – and that might mean that you are missing out on something amazing!

Pharaoh sent his soldiers all over the empire to find the Hebrew baby who would be a threat to his kingdom. The secret police, the royal guard, everyone was involved in the search. Pharaoh knew intuitively that his kingdom was in danger from a young Hebrew boy. But the fact is that Moses was right there in the palace all along, right in front of Pharaoh’s nose! When God wants to hide something, he hides it. You won’t see it even if it’s right in front of you!

But now – today – Jesus wants you to see that in the midst of the opposition you are experiencing right now, in the midst of the opposition that you have been struggling against for years, there is a solution. He has hidden a treasure inside of you! Yes, I know that no one else has seen it – maybe not even your own mother! No one in Nazareth saw the treasure that God had hidden inside of young Jesus, and it wasn’t until 30 years later when he stood up to speak that everyone was astonished. “Where is that coming from?” they asked themselves. “We didn’t teach him that.”

And you might be saying, “But no one sees the treasure inside of me.” Yes – God sees it! But remember: As long as you keep accepting what shouldn’t be acceptable in your life, the treasure will remain hidden.

This year, God is opening a door for you, an open area in the Spirit. Let the springs inside of you begin to bubble up again, let the treasure inside of you start to bloom. The kingdom of God needs you! The people around you need you. Share your treasure with someone else. Share it with others! Then and only then can you begin to experience true joy. 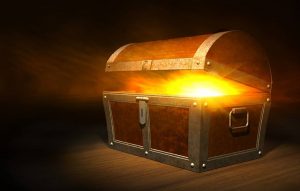