God always has a better alternative!

Good morning! This morning as I prayed there was a word that I sensed quite strongly, and I believe that it will be an encouragement to you. In the Old Testament there was a very influential man in the Middle East named Naaman. He was the general of the Aramean troops. Just when he had reached the pinnacle of success he became sick with leprosy. His body was being eaten away from the inside. The Aramean doctors told him that there was no cure and that they were powerless to help him. At that time, when he was surrounded by hopelessness and misery, a young girl told him about Elisha, the prophet of Israel. “Go to him,” she encouraged Naaman, “because if you do then you will be made well.” Naaman asked his experts about this but they just laughed at him, especially his doctors. His friends advised him to just stay home. Everyone was convinced that even if he somehow survived the trip there and back, it would just bring him even closer to death.

When he went to see Elisha, Naaman received the following word: “Go and bathe in the Jordan River, and you will be made well!” Now he had a choice. He could believe in God and obey the Word he had received, or he could turn around and go back home again. At first he hesitated, but then he did what God had told him to do, and he was made completely well. 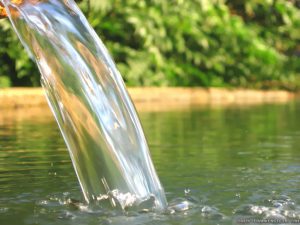 No one would have blamed Naaman if he had just done what anyone else would do in his situation – but in that case he would have died from leprosy! If Abraham had done like all the others then he would have stayed in Haran, Noah would never have built a boat, David would have killed King Solomon, the prophet Daniel would have bowed his knee to the idols, Peter would have kept fishing, and Paul would have kept sewing tents! But no, they did not let themselves be shaped by the ways of this world. Instead, just the opposite, they renewed their minds every day so that they could understand and do the will of God.

That is the Lord’s word for you today. There is always an alternative: God’s alternative. You don’t need to do what everyone else would do. Naaman didn’t, and neither did Abraham or Peter. “The one who hears my Words and does them,” said Jesus, “is building his life upon the rock.” It is a daily task to renew your mind so that your thoughts are like the thoughts of Jesus, and to refuse to let your thinking be shaped by the ways of this world. This applies to all areas of life. It doesn’t just apply to your health, it also applies to your family, your job, friends, finances, and life in general. God always has a better alternative!